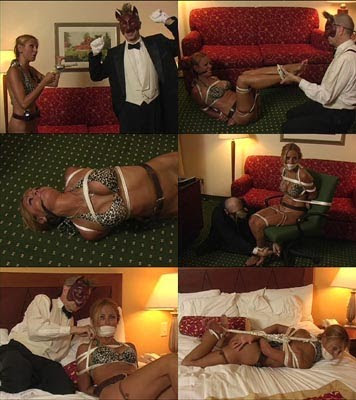 "The Butler" (played by Valentine Acama) may well be the most diabolical villain the modern world has ever seen, even though he himself appears to be trapped in a curious time warp. When observing instances of his dastardly behavior one can easily believe that The Butler could possibly be the reincarnation of Jack the Ripper. Then again, maybe Jack just never died. One thing is certain: The Butler specializes in the abduction and torture of beautiful women. He like them feisty and aggressive because he relishes a challenge. Secret agent Stacy Burke is the most recent buxom damsel to fall into his evil clutches. It seems that Agent Burke has finally met her match. Even after a lifetime of daring, life-endangering escapades and missions, nothing could have prepared her for the evil, salacious Butler! Will Agent Burke be able to escape from the tight, white ropes that bind her? Her life depends on it..